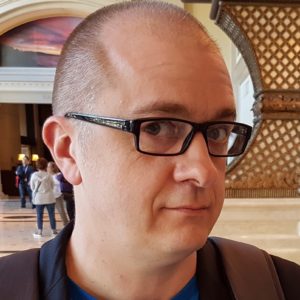 In 2005 Gareth founded the BBC’s Digital Accessibility Team. This team was tasked with ensuring all future services delivered by IP would be fully accessible.

Over the course of the first 3 years the Accessibility Team worked as an integral part of iPlayer’s core Product Team which ensured BBC iPlayer V1.0 launched as s the first fully accessible VOD service in the world including subtitling, audio description and sign interpreted content.

In 2008 Gareth was tasked by the BBC Trust to design an IPTV accessibility ecosystem for a connected TV platform. This work informed the BBC Trust’s accessibility requirements for YouView. He then acted as YouView’s Product Manager for Accessibility for the next 2 years enabling YouView to be the first platform with a bespoke switch interface and interface zoom functionality amongst other bespoke accessibility features. Whilst at YouView Gareth’s interest in typeface accessibility began which enabled him to play a part in the creation of BBC Reith.

In 2010 he returned to the BBC Future Media’s User Experience and Design team to head-up the Accessibility team and create a new team focusing on Design Research.

Some of the outcomes of support these teams provided led to the BBC’s 2012 Olympic coverage, website, red button services and mobile app being the most accessible to date, creating The BBC’s  Mobile Accessibility Guidelines (with Henny Swan and Ian Pouncey) and co-wrote the BBC’s first games accessibility guide  (with Tom Bradley) which consolidated the work of Ian Hamilton, Cecelia Weiss, Lucy Pullicino and others to ensure knowledge was retained in the organisation.

Gareth was also one of the original contributors to gamesaccessibilityguidelines.com.

In 2013 he established a new direction for the Accessibility team built on a network of over 180 Accessibility Champions, no auditing, and has turned the accessibility team into a mixture of cultural change management and an R&D function focusing on subjects like VR, cognitive accessibility, voice interfaces, documentation driven development, children’s games and typeface design.

Championing Accessibility in any Organisation